Posted at 18:55h in Uncategorized by bluedot 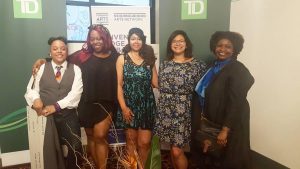 The tendency is to abhor anything being labeled, “corporate social responsibility”; a predisposition of which I am usually guilty.  Among the justifications for this sentiment is that gala’s such as these, no matter how they tout otherwise, are simply devoid of melanin.  I am pleased however, to report that this was not the case at this year’s Diversity Awards Finalist’s Gala.
Upon my, fashionably late entry into the space I could see that the gala was really diverse; and as the night progressed it became a rare manifestation of Torontonian non-segregated multiculturalism.
The people in that room represented the pinnacle of activism, advocacy and community arts in this city and as a result, the ambiance was one of understanding (counter-hegemonic viewpoints).For once, the warriors could leave their shields checked at the door, resting assured that there would be no battles to be fought; because we were all on the same side.  Consequently, no one was on edge, waiting and ready to leap to the defence of some poor souls misunderstood by the mainstream; and that unburdening did something magical to the atmosphere. The vibe was celebratory yet relaxed.  People felt comfortable and free to be themselves; which eventually manifested into the most epic dance party I have ever seen at any charitable event!
As I stood to one side and watched the beautiful individuals of all creeds, shapes, and abilities dance to the musical selections of L’Oqenz, their carefree faces and gyrating hips did more than just put a smile on my face.  Those exuberant dance moves signaled to me that they felt safe in the space; and that those subtle stressors of internalized judgments,  that usually relegate the more ‘diverse’ of us to the role wallflowers, were far diminished.  So much so, that even the most unlikely were able to let their hair down; and that was marvelous takeaway of the entire evening.I was there to witness what TD sponsorship had a hand in fostering, and I can say (somewhat begrudgingly) that it was a good thing.  In summary, how was the gala?  The party was litt, and the people were woke! Congratulations to the Diversity Awards finalists, and to all the warriors that fight for change every day.
Glamma Kimaiyo